Once upon a time, King Tristan hosted a fancy masquerade ball on the night of Hallow’s Eve. He invited Fairy Elijah, who brought along Hybrid Fairy Hayley with him, and Fairy Marcel. He invited neither the malevolent Hybrid Fairy Klaus nor Klaus’s protégé, Fairy Lucien. Filled with rage, jealousy and a lot of booze, Fairy Klaus and Fairy Lucien decided to horribly crash King Tristan’s party.

That’s basically the summary of the season 3’s fourth episode, A Walk on the Wild Side. Since it was aired on the Eve of Halloween, the creators and staff thought it was only fitting to bring the festive air onto the screen, hence the parties.

The episode begins with a shot of Marcel wearing shorts and jogging along the streets of the French Quarter. Seeing some of Charles Michael Davis’s muscles is fair and all, yet I can’t help wondering whether Marcel’s exercise is completely pointless. Well, the purpose of exercising is to keep fit, prevent obesity and strengthen the cardiovascular system, which a vampire obviously doesn’t need. Remember when Caroline wolfed down human food to quench her blood thirst or when Elena consumed tons of French fries? Neither gained a kilo and that’s what vampires don’t do: they don’t gain weight because they’re, well, dead already. So what’s the point in jogging anyway?

After Marcel’s unnecessary exercise, he comes back to his vampire lair in need of some sips of alcohol, only to find all his booze gone (pretty sure alcohol isn’t a good choice this early in the morning), a pair of golden owl-shaped cufflinks in a bottle and a mysterious tuxedo hanging on the rack, courtesy of a certain chocolate-skinned sexy vampire. You know what’s creepier than a creepily delivered suit? It’s how the Strix managed to get Marcel’s measurements! Is it one of the many talents of the Strix members? 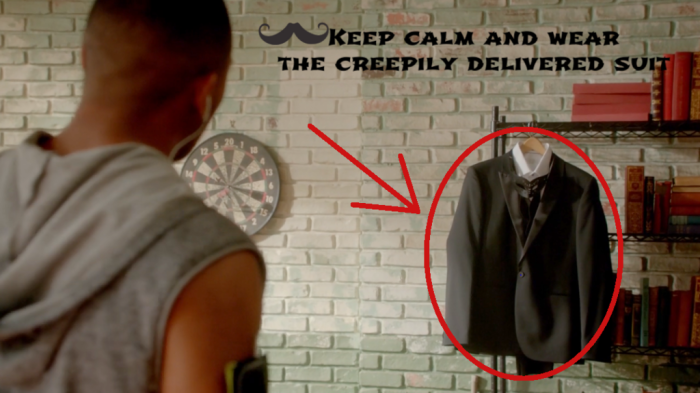 Next, Marcel’s phone rings and Marcel, assuming it is his mysterious and hot delivery woman calling, intends to flirt a little. Too bad it’s a dude on the other line (quite a mood killer), Tristan, the leader of the Strix himself, who cordially invites Marcel to a fancy ball. That Marcel will definitely attend the event is a foregone conclusion, otherwise we won’t have this episode.

The day before the Halloween is without a doubt an exercise day, because while Marcel’s running the streets, somewhere around the corner Freya is doing yoga and Elijah is doing some angry boxing in sleeveless shirt (more muscle showing), which is not-so-blissfully interrupted by Hayley’s bringing him an invitation card to an event. Unsurprisingly, it is the same party to which Marcel is invited and we have a sense of foreboding. It’s not a tradition of this show (and its parent show) to have a party in which nothing wrong happens.

Now, what exactly is Hayley doing in Elijah’s gym? Isn’t she supposed to be in her new home, unpacking things with her husband since last episode, they were too busy having their fun time to do that? And where is Jackson? Not that I awfully mind his absence but I’m pretty sure the man doesn’t appreciate his wife hanging out with her old flame, especially when this old flame still burns strongly.

Anyway, Hayley says she was picking up Hope and some random vampire just swooped in and handed her the card. I believe Tristan taught his lackey better – the invitation is for Elijah, who is, by the way, the patriarch of this vampire society, so shouldn’t the card have been handed to him personally instead of some random neighbor? 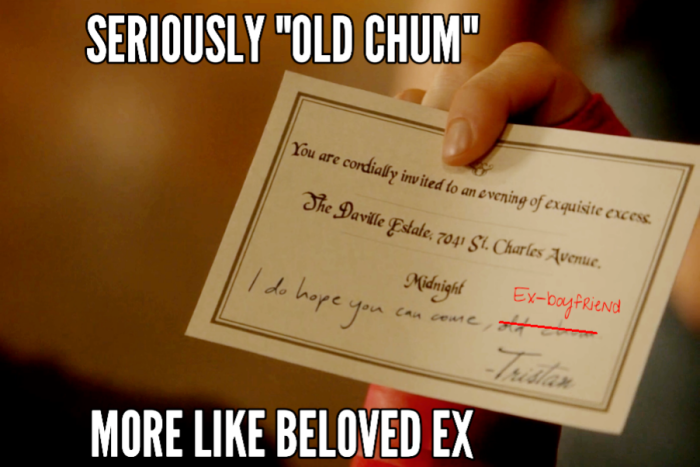 That aside, Tristan’s little message exudes some ex-vibes. “Old chum”? Is that how they address ex-lovers in the Strix? Hayley must have felt those vibes too, because the next scene has her inviting herself to be Elijah’s companion. He doesn’t object, though.

Cut to the evening, when the fun begins.

While Hayley and Elijah are getting ready for the event, stealing Rebekah’s dress in the process, elsewhere in the French quarter, Klaus finds his ex, sorry, old chum, partying while he should be protecting the hybrid. Seriously, what’s your point, Klaus? A few previous episodes you said you didn’t need any protection and now you’re demanding Lucien to get off his ass to work on holiday? Well, Klaus wouldn’t be Klaus if he wasn’t acting that way and Lucien has probably gotten used to that demanding attitude (they must be ex-lovers and nothing can convince me otherwise), so he willing abandons the fun to take Klaus to the penthouse for a bite of Alexis (Lucien’s seer, in case you forget her name).

… Only Alexis’s nowhere to be found – first sight of trouble.

Apparently Lucien’s resources aren’t very resourceful as he claims and since they have limited time before Lucien’s psychic friend potentially becomes dead psychic friend, they turn to the only witch in town that will help them: Freya, who’s on her way to a night of her own and is interrupted yet again by her brothers. Being the big sister she is, Freya agrees, but only after trading a few snarky remarks with Klaus and Lucien. One thing I haven’t expected in this episode is Lucien’s flirting with Freya and it’s not like it bothers me at all. Their interactions are lovely and I have a feeling they’d made a very entertaining couple, if that is to happen. Well, it’s still too soon to say anything about Lucien and Freya but I do hope they’ll have more scenes and lines together. As far as I’m concerned, Frucien absolutely beats Jeya (Jackson x Freya).

Freya quickly finds out Alexis’s whereabouts, the Daville Estate where Marcel, Elijah and Hayley are. Feeling outnumbered by the Strix, Klaus proposes a plan to infiltrate the place to rescue the seer, which involves the two of them getting very drunk and dressing Freya in revealing outfit, with a Catwoman mask and a pink wig. What an ingenious idea! 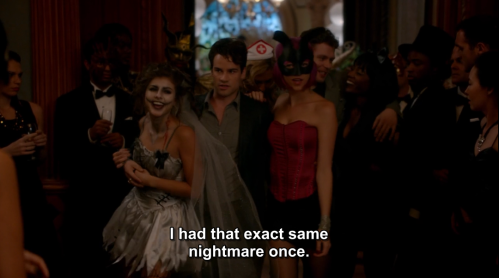 Meanwhile, Elijah and Hayley enter the place like a boss, earning themselves a lot of stares. We soon learn that Elijah is really the boss around here, as he founded this vampire version of Mean Girls’ Plastic and was probably its leader at some point until he left the throne to his ‘son’ Tristan. It’s hard to determine whether this was the most brilliant or the dumbest idea in Elijah’s long life to create such an extensive and influential legion of “egomaniacal sociopaths”; still, they’re much bigger a threat than Klaus’s litter of short-lived and dull hybrids. 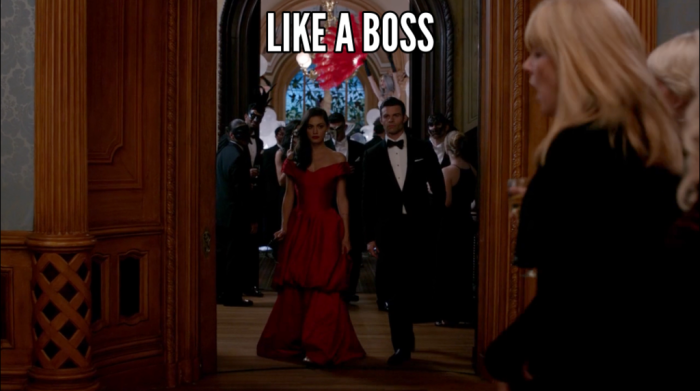 It leaves me thinking whether at some time, Elijah was an “egomaniacal sociopath” himself.

The Strix, led by Tristan, are quick to prove their meanness when Tristan declares this party is a test to determine if Marcel is qualified to become their “equals”. With his daylight ring stolen and himself surrounded by ancient vampires, Marcel has no choice but to play their game. Moral of the story: fancy tuxedo and golden cufflinks delivered to your house free of charge aren’t really free. Nevertheless, Marcel wasn’t raised by the Mikaelsons (and survived that family) and became the French quarter king for nothing: he quickly comes up with a plan to overcome Tristan’s trial, enlisting Hayley’s fangs for help. It works marvelously and by the end of the night, he becomes the first member ever to be sired by another bloodline.

Other vampires are strongly advised not to try Marcel’s gambit unless they have a hybrid foster father near them.

This episode continues to prove that Marcel is truly a Mikaelson sans the name and the other Mikaelsons care for him much more than their pride allows them to admit. Elijah is willing to ruin his favorite tuxedo and a bit of his reputation with the Strix to aid Marcel and Klaus gives him his blood despite his complaints and mocking of Marcel’s joining their supposed enemies. I have a feeling that Marcel’s conversations with both Mikaelson brothers are very much alike those of a teenager who is trying to reason with his parents to be allowed make his own decisions. And from what we’ve seen, he’s quite upset when being treated as the child Klaus, Elijah and Rebekah raised instead of their equal.

It’s good to see both Marcel and Hayley consider themselves a part of the Mikaelson family and try to help in one way or another; nevertheless, with the prophecy looming over the Originals, even they can’t be ruled out of the list of enemy.

Sometime before Marcel’s test, Tristan introduces himself to Hayley and seems to take an interest in her as he asks her for a dance, causing a certain number of fans to start shipping them. It remains to be seen whether Tristan’s interest in Hayley is genuine or he is merely trying to invoke his sire’s jealousy, which is quite a successful attempt considering how uncomfortable Elijah is as he watches them.

It’s noted that both Lucien and Tristan have shown interest in the intended love interest of their respective ‘daddy.’

Tristan’s flirts are interrupted when Klaus and Lucien barge into the estate gloriously hammered. So, this is Klaus’s plan to rescue Alexis – while he and Lucien attract all attention to themselves, Freya sneaks out to search for the seer, who is enjoying her champagne and looks more like a guest than a captive. Odd, anyone? In this scene, Freya once again proves herself to be a true Mikaelson by 1. threatening to perform a blinding spell on Alexis if she refuses to cooperate and 2. punching the psychic square in the face for daring to kiss her and talking bad about her siblings. You don’t cross Mikael’s daughter without earning at least a few bruises.

Later, it is revealed that Alexis was already poisoned before Freya walks in, severing her role as vision provider for Lucien and the Mikaelsons. I wonder if Alexis had foreseen her own death (she did foresee Freya’s coming after all) and prepared to put something in Freya so Freya could take on her unfinished business. Otherwise her mean words for Freya and the visions she shows her about being buried alive seem a bit wanton.

Wait, that vision implies Freya is still an immortal, right? Because being buried alive is more frightening as a punishment for someone who cannot die than as a murder method – a mortal would struggle for a few days and be released while an immortal’s suffering would last forever.

Lastly, while we audience as well as the Mikaelsons are debating whether it is Tristan or Lucien is the big bad, we sort of miss Aurora, who is lurking in the shadow behind her brother’s back with a shady plan of her own. She may be even the one to possess the secret weapon to destroy the Originals.

The lesson of the episode: don’t underestimate a woman who seems crazy like Tristan does.

Highlights of the episode:

Look Me Over Closely

Angels with a shotgun

I never dreamed that I’d meet somebody like you

If the world should end

When the sun sets we’re both the same

While your lips are still red

Sweet Dreams (Are Made of This)

Love You to Death

Time in a Bottle

i did my best. there is nothing else i could have done